History of the Berlin Fair

Organized in 1856 as the Ottawa Agricultural Society

The Ottawa County Agricultural Society was organized in March of 1856 by twenty-one farmers of this county who believed it would be beneficial to do so. It was resolved that the First Annual Fair of the Society be held on the 24th and 25th days of September of that year at Lamont. That fair, held on five acres of ground just east of the village was reported to be a great success. The second fair was held in Eastmanville, and then was held back in Lamont, until it was moved to the present location in (Berlin) Marne in 1870.

Early fairs were reported to be well attended, and exhibits were numerous, and included livestock, agricultural products, fruits and vegetables, and needlework, just to name a few. Plowing matches were held, and the fair concluded with a County Fair Ball. Commercial exhibits included the new and wonderful wringer washing machine, sewing machines and musical instruments, including pianos.

By the 6th Annual Fair, the Civil War had broken out, but the New York Observer ran an editorial “Don’t Give up the Fairs”, and so the fair was held that year, and in following years of war.

The fiftieth annual fair held on September 26-29, 1905, was advertised to be the best ever, brim full of interest, and fun by the ton. By that time, trotting, pacing and running races were a big part of the entertainment.

World War I brought about the name change of the village of Berlin to Marne, but the fair remained to be the Berlin Fair. Then secretary of the fair stated “it is still the Berlin Fair, and it always will be”.

By the 1930’s ball games between local teams also became popular. Better baby contests were held to increase health and strength of babies, and a public wedding was held at the grandstands. A drawing was held for an automobile with tickets obtained from local merchants with each dollar of cash trade. Radio station WLS entertainers performed at the fair for many years.

The Berlin Fair has seen many changes through the years. 4-H and youth are a big part of the fair. Mr. Edward Dinkel, past president of the fair board, stated in his centennial address “…you can be assured that the Berlin Fair will always be an Agricultural Fair…as well as living up to our perennial idea that “The Berlin Fair is a Family Affair.”

It is well to know that fifty years later his sentiments still hold true. The Berlin Fair remains to be a wonderful agricultural fair with much community and family involvement.

Berlin Fair Mission Statement
With an emphasis on youth and agriculture, we provide the community
with a financially sound fair that educates, entertains, and allows for
community involvement with a wholesome family atmosphere.

Do you have a boat or trailer that you would like to store inside during the Michigan winter months? If so, the Berlin fairgrounds has space available. Since space is limited, storage will be offered on a first come, first serve basis. 2020 Check-in Dates September 26... 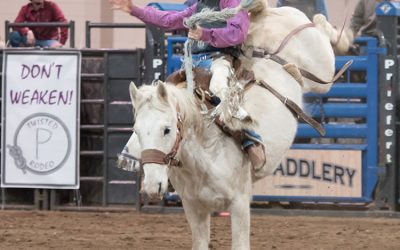 Check out our 2020 Rodeo Outfitter

If you're looking for weekend plans February 14th - 16th, look no further! Check out Twisted P Rodeo at the Annual MSU Spartan Stampede Rodeo. Twisted P will be our Friday night Pro Rodeo outfitter this year at the Berlin Fair.